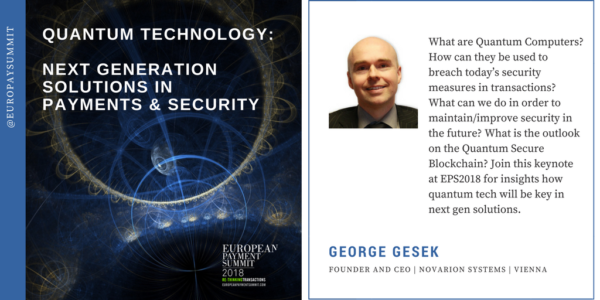 The field of quantum technologies is increasingly in the spotlight beyond the scientific and research community and looks set to be one of the key technologies of the future. The European Commission has also announced a €1-billion (US$1.1-billion) flagship research initiative in the field of “Quantum Technology”, aiming to catch up with advances in rival regions.

With the rapid development of information technology, global change is imminent and most industries are undergoing major shifts. According to Georg Gesek, founder and CEO of Novarion, the interconnected world of IoT and quantum technology will be decisive and key in future tech shifts. Yet what does this all mean to payments and security? Could the technology bring encryption to the next level?

“We’re in a technology arms race of sorts. When quantum computers are fully developed, they will break much of today’s encryption whose security is only based on mathematical assumptions. To pre-emptively solve this, we are working on new ways of communicating through large networks that don’t rely on assumptions, but instead use the quantum laws of physics to ensure security, which would need to be broken to hack the encryption,” explained lead author, Dr Ciarán Lee (UCL Physics & Astronomy).” (Science Daily)

George Gesek will deliver his lecture and expert briefing, with Q&A on these topics:

Economist: Quantum technology is beginning to come into its own